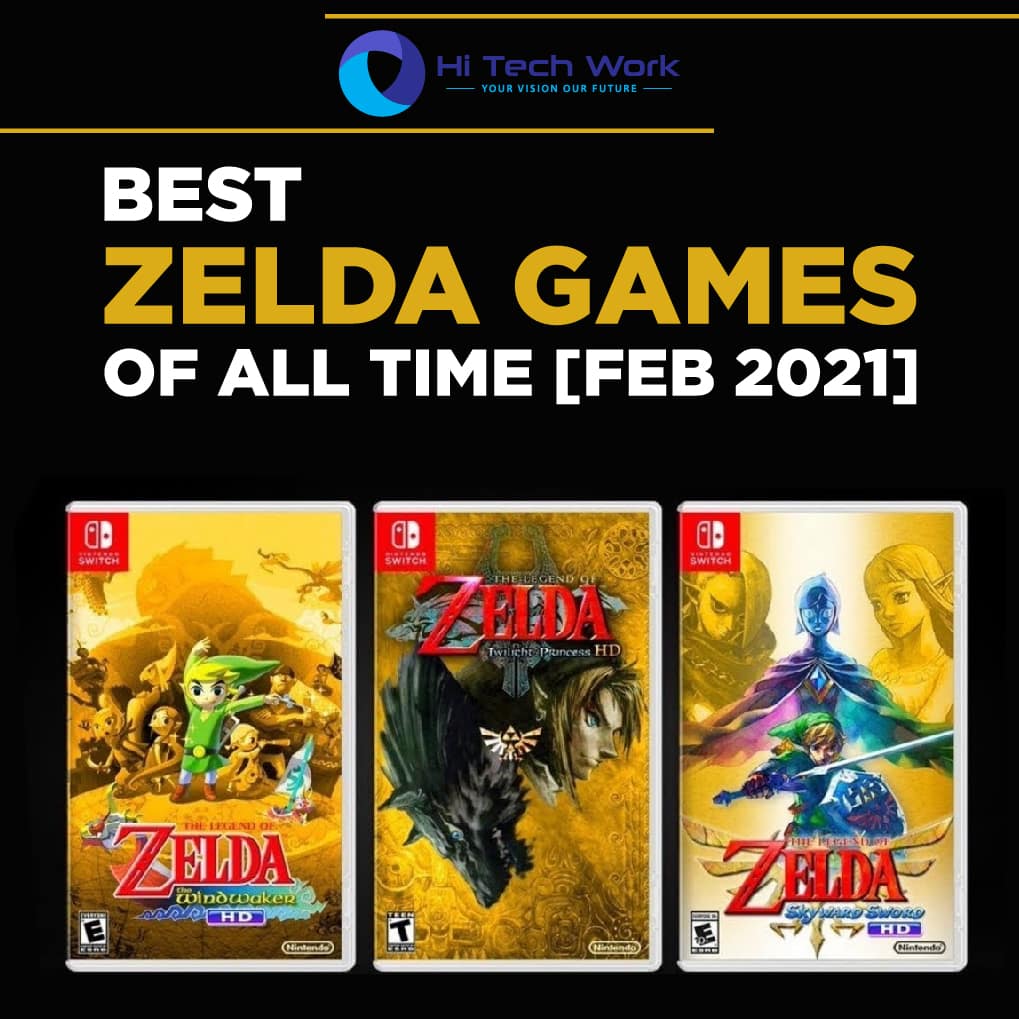 Here is the complete list of the top 10 best Zelda games all over the world. Nintendo struck gold when they formed The Legend of Zelda for the Famicom in 1986. Their fantasy adventure series would fit one of gaming’s legendary hallmarks. Thirty-four years later, The Legend of Zelda continues to set the gold standard and gains the world’s attention with every subsequent release.

Despite this legendary series offering well over a dozen classic games, ten can only fit a handful of favorites. Please also keep in mind that ports, remasters, and collections featured in the site’s top ten are omitted.

Minish Cap was the first new single-player Zelda game on the Game Boy Advance. Using the cel-shaded art style from Four Swords and Wind Waker, this took Link to the land of the Picori. While featuring the 2D gameplay familiar for A Link to the Past fans, the new twist came with the ability to shrink into a tiny being.

While Minish Cap was beautiful and charming, it was also short and relatively painless. Even though once normal-sized enemies could become giants against Minish Link, it provided some entertaining boss battles. Despite only six dungeons and not challenging boss fights, Minish Cap offered entertaining areas to explore and some epic new sword techniques.

Link’s debut on the Nintendo DS offered a stylus-only control scheme. Set after the Wind Waker, this story entails Link and Tetra’s journey to find a new Hyrule. Utilizing the stylus, Link will explore the oceans, chart sea routes, make a map, and even solve puzzles.

Phantom Hourglass did not offer the most immersive innovation with fairly standard weapons and combat. The DS’ screens and stylus, however, showed a new level of innovation. Plus, it introduced charming characters, such as Ciela and Linebeck, to the series.

The sequel to the glorious A Link to the Past, A Link between Worlds, took place in the same realm but a different era. Featuring a Dark World, Link also gained the ability to become a drawing. This allowed him to slip through cracks as well as flatten himself up against walls to solve puzzles.

This near-perfect, polished adventure recreated the most enjoyable parts of its predecessor while innovating at the same time. It timed the part of a throwback to the SNES while introducing new fans to the best of 2D Zelda. A Link between Worlds managed to culminate into an unforgettable adventure with strategic puzzles, striking world design, and perhaps the best ending in the series.

When Nintendo published Skyward Sword for the Wii, it matched the first original mainline Zelda game to debut. As Twilight Princess was initially a GameCube title, the Wii version did not implement 1:1 motion control. Skyward Sword’s ability to interact with the Wii Remote allowed players to slash at multiple angles. This lead to Nintendo utilizing creative battle mechanics against powerful opponents.

Skyward Sword took place at the beginning of the entire Hyrule Saga. It introduced the Goddess Hylia, the demon Demise, and the origins of the Hyrule Kingdom. Many of these elements, including the Master Sword’s spirit, Fi, would later appear in Hyrule Warriors.

While the Game Boy Advance version made it into Metacritic’s top ten – mainly due to the time-release window – it is otherwise a near-direct port of the SNES masterpiece. A Link to the Past featured an incredibly large-sized inventory menu and the most extended dungeon count in the series.

What made A Link to the Past special was its high level of world-building at the time. Thitimet only included fleshing out Hyrule but its counterpart, the Dark World, as well. A Link to the Past totally overhauled the 2D gameplay of the original NES Legend of Zelda. It would later set the foundation for the storylines of future games and the gameplay for Link’s Awakening, Oracles, Minish Cap, and A Link between Worlds.

Released two years after Nintendo’s colossal success, Ocarina of Time, Majora’s Mask took Link to the world of Termina. Set as a parallel world to Hyrule, it was in danger of being destroyed by a moon within three days. Link had to gain masks, master the Ocarina, and solve people’s troubles to stop Majora’s Mask from destroying the world.

Majora’s Mask was developed in particularly six months and was producer EijiAonuma’s first game as the lead. However, the dark turn it took stuck out in the memory of many fans. Majora’s Mask became renowned for tugging heartstrings in a way the series never has since.

After the cel-shaded Wind Waker, fans demanded a reversion to form the way of the N64 titles. Twilight Princess’ E3 2004 debut sent shockwaves through the convention and the internet as many fans rejoiced over the seeming “return” for the series and Adult Link.

Twilight Princess introduced Link’s Wolf transformation as well as the arrogant princess sidekick, Midna. Featuring a darker, more solemn tone than past games, Hyrule was in danger of being consumed by the Twilight Realm. At the time it btimee the most extensive adventure in the series as well. Note that this GameCube/Wii title also received a remaster on Wii U.

Initially, the Wind Waker’scel-shaded graphics did not receive a warm reception. The cartoonish style took a complete 180 from the shonen anime-style featured in Ocarina of Time and Majora’s Mask. Despite this, however, Wind Waker became an immense success.

Wind Waker evolved on Ocarina of Time’s combat by adding slander combos and parrying. The animations were indeed one-of-a-kind and aged phenomenally. Wind Waker would later receive a full-scale remaster on the Wii U, which featured updated visuals and quality-of-life improvements.

Nintendo shattered expectations when they showcased the Switch. Their latest bit of hardware was set to showcase impressive visuals and, with that, a new Zelda game to launch the system. The beautiful, cel-shaded title took the animation and colors of Wind Waker and melded it with the style players loved in Ocarina and Majora’s Mask.

Breath of the Wild became known for being the first full-console Zelda experience that could be played on a handheld system. About 100 hours in length, this challenging title included 120 mini-dungeons and tons of hunts to tackle before entering Hyrule Castle to save the universe once again. This beautiful adventure had full voice acting, tons of lore, and some of the most emotional moments in the series.

Nintendo’s standard for Zelda games is what everyone remembers, which redefined gaming as we know it. Ocarina of time’s 3Dtime’slay, combat, day/night system, and button mapping featured elements well ahead of its time.

EvetimeD Zelda’s title was always compared to Ocarina of Time. The measuring stick of the series made the world of Hyrule, featured amazingly polished gameplay, and held numerous side-quests. The 3DS remake featured faster framerate, perfected visuals, a boss rush mode, and even the Master Quest version once exclusive to a GameCube bonus disc. Perhaps one day, players might see yet another re-release.