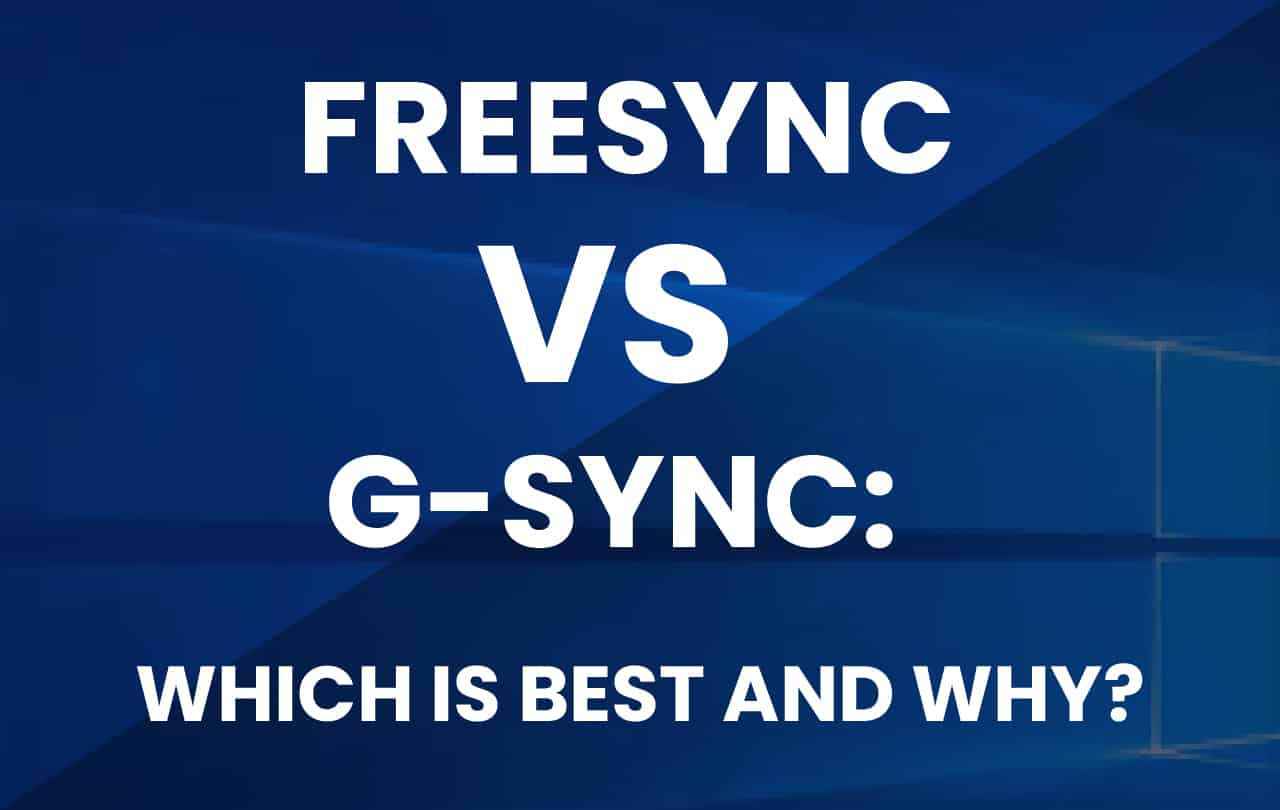 This is the complete guide on FreeSync vs G-Sync. Buying and building your perfect gaming rig means taking a careful and decisive look at several hardware specifications and integrated technologies before checking out. In order to accommodate the demanding visual and performance requirements modern video games are developed with, gaming computer manufacturers have worked tirelessly to bring ultra-compatible products to the market.

When you start looking into adaptive sync technology, two industry-leading names come to mind; AMD’s FreeSync and NVIDIA’s G-Sync. Both are among the most talked-about gaming enhancers, but there’s a bit of a grey area when it comes to their purpose and function, and whether or not there are differences between the two. Let’s take a deep dive and tackle your questions. Time to settle the debate between FreeSync vs. G-Sync.

Adaptive Sync, often branded as “FreeSync” by AMD and its partners, is a feature that lets a monitor pause its screen refresh until an entire frame of animation is ready to load. This happens multiple times per second, faster or slower depending on how fast you’re PC and graphics card can render the frame. If the frame is slower than your monitor’s refresh rate, it will wait. This allows the motion in the game to remain smooth without tearing.

G-SYNC is NVIDIA’s branded alternative to adaptive sync/FreeSync. Unlike FreeSync, which doesn’t need any further hardware, G-SYNC monitors include a tiny computer module inside them to manage the syncing of frames rendered by the GPU and displayed by the screen. This section is manufactured and supplied by NVIDIA to its hardware partners, which is why G-SYNC monitors are almost universally more expensive than FreeSync monitors.

But for a few years, PC gamers with NVIDIA cards have lamented their lack of access to the adaptive sync/FreeSync capabilities on cheaper monitors. As of NVIDIA driver version 417.71, released on January 15, 2019, this is no longer an issue.

FreeSync is AMD’s alternative to G-Sync, appropriate only with AMD graphics cards. Though it uses the same basic adaptive refresh technology as its competitor, AMD has made the technology lie purely on the graphics card side by utilizing the existing VESA Adaptive-Sync standard, a part of DisplayPort 1.2a.

G-Sync is NVIDIA’s proprietary solution to solving screen tearing using something called adaptive refresh technology and compatible only with NVIDIA graphics cards. Basically, this means that your frame rate and refresh rate get synced together, up to the monitor’s max refresh rate. So if your GPU is pushing 98 FPS on a 120 Hz display, the two sync at 98Hz.

Free sync and g sync are what are known as flexible sync technologies. They serve as alternatives to the Vsync option that you can find in the graphics menus of many video games. Now if you aren’t sure what Vsync does, here’s a quick rundown.

It all has to do with the monitor. A monitor refresh rate which is measured in hertz determines how many frames the monitor can display each second.

In theory, this acts as a hard tap on your FPS or frame per second. Even though you’re GPU may be able to render 80 FPS in a certain game. A 60Hertz monitor can only flip through 60 of those frames every second. This disbalance, however, is usually not as amicable as we’ve just described it.

Once you’ve used an adaptive sync display it’s hard to go back, but there are some things where buying a display without adaptive sync might make sense, especially if you are on a tight budget.

Gamers who play primarily competing FPS games should prioritize a high refresh rate (120Hz and above) display—whether or not it has adaptive sync—over one that supports either FreeSync or G-Sync but has a refresh rate lower than 75Hz. However, in most cases, FreeSync and G-Sync will greatly improve your gaming experience.

Q: Is G Sync worth it over FreeSync?
A: Freesync is far low-cost in almost all scenarios and therefore is probably usually the better buy. That being said, it depends on the GPU you have of course. If you take into account the current market, AMD cards price so much that the equivalent nvidia performance + g sync could potentially = AMD+Freesync.
Q: Why is G sync more expensive than FreeSync?
A: While Nvidia charges monitor manufacturers to install the G-Sync H/W module into their devices, FreeSync is royalty-free and has no licensing costs. This means that consumers with Nvidia graphics cards pay a premium for the same technology that AMD card owners get for free of cost.
Q: Can G Sync work with FreeSync?
A: You can run G-Sync successfully on a FreeSync monitor if it’s on Nvidia’s approved list. You’ll have to give up HDR and overdrive to do so, but it works well otherwise. We had no issues during our testing.
Q: Do you need G Sync for 144 Hz?
A: YES there is a change between a 144 Hz monitor with and without GSync. If your system monitor does not have GSync and your GPU is unable to produce 144FPS, you will notice tearing.
Q: Do you really need G Sync?
A: G-Sync is obviously worth it if you’re an Nvidia user and are looking for a monitor with a high refresh rate. If you’ve ever thought about getting a monitor with a high refresh rate i.e. a 144Hz or a 240Hz one, then you’ve probably noticed that a clean number of them come with something called G-Sync.
Q: Is Gsync good for FPS?
A: G-Sync is best for FPS games such as overwatch. It excludes screen tearing, which can be very distracting in an FPS, and adds virtually no input delay as either.

The two effectively solve the same problem and heighten gameplay in a similar way. For gamers looking to upgrade their in-game experience and wave goodbye to screen-tearing and laggy performance quality, either adaptive sync technology will suffice and satisfy.

The differences are more subtle now. FreeSync2 is improved and older screens with LFC are mostly on par with G-Sync compatible models, but can’t be had for the same dirt cheap prices. With NVIDIA’s adoption of the VESA standard, the playing field has mostly levelled. Share your valuable thoughts and suggestions in the comment box section below.